In a Spanish 64 bit Windows, where 32 bit and 64 bit program files / binary files also must be placed in different folders, there will exist the following two folders on the user’s hard disk:

This can be compared with the folders in an English 64 bit Windows:

(more examples of localized folder names is available in this article on our web site.)

Use an environment variable
It is impossible to handle all of the above combinations by hard-coding the folder path to the Program Files folder. We also advise against any tries to do so. Instead you should use an environment variable in Visual Installer that has the name %PROGRAMFILES to handle this. By placing this variable in the beginning of a folder path, for example like this:

the %PROGRAMFILES variable will be changed to correct folder path, regardless of the bitness of the program files / Windows and regardless of the language of the Windows. This replacement will occur during the setup process in the user´s computer.

If you click on this button (the button with three dots) the dialog box below will be opened:

Via this dialog box you can choose and include the %PROGRAMFILES variable, or another relevant variable, to the main folder of your installation project in an easy way.

Our setup tool SamLogic Visual Installer handles all this automatically if you specify the bitness for your setup project in the 32/64 bit tab in the Setup options dialog box in the editor, and uses the %PROGRAMFILES and %SYSDIR variables when you specify destination folders for your installaton files.

The %PROGRAMFILES variable can be used in the Main folder text box in the File list tab in the Visual Installer editor. The picture below shows an example of usage:

And if a file should be installed to the System folder in Windows, you can choose the System directory (%SYSDIR) option in the Destination folder dialog box, as shown below:

If you use these variables in the way described above, your files will always be installed to correct folders in the system.

More information
More information about 32 and 64 bit folders is available in this article on our web site:
> Windows 64-bit: The ‘Program Files (x86)’ and ‘SysWOW64’ folders explained

A useful feature in Visual Installer is the possibility to show visually for the user when he/she enters correct license key in the License Key setup dialog box. The user can see that the license key is correct before he/she presses the Next button. The picture below shows how it may look like:

As soon as the correct license key has been entered in the License Key dialog box, the text color of the license key is changed to green and a green check mark is shown to the right of the entered license key. This will simplify for the user when he/she for example enters a license key that is printed on a label. 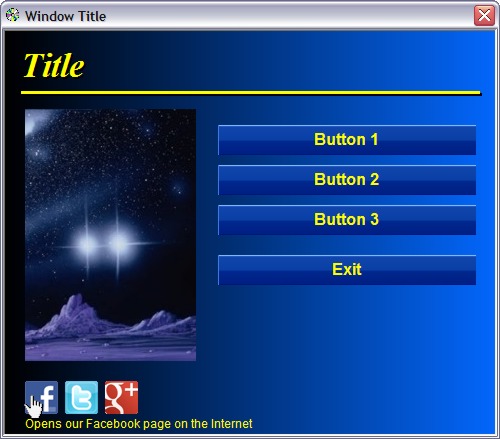 With this built-in functions in CD-Menu Creator can connect a menu interface for a CD, DVD or USB flash drive with social media like Facebook, Twitter and Google+ in an easy way.