The default language for setup dialog boxes, information messages and error messages in the Visual Installer setup tool is English, but you can use another language if you want. You can change language by choosing the Special – Language menu item in Visual Installer’s editor (see the picture below): 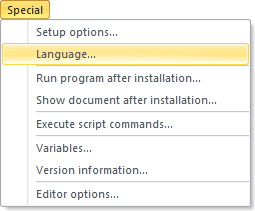 All standard texts are stored in separate language files. An English and German language file is included as default, but it is easy to add your own language file to Visual Installer and use it for your localized installations.

The tip below shows how to do this:

The language file only contains standard texts. With standard text we mean texts that are the same regardless of project; for example texts for navigation buttons, and information and error messages. When you enter project specific texts, for example about a specific software, these texts are stored together with the project file (.VIP file). In the following tip we show how to add and change project specific texts: